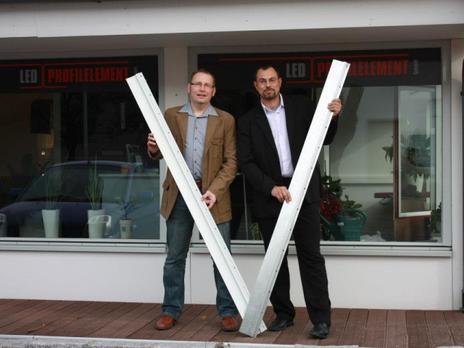 The history of our company begins in 1996 with the founding of “B&M Bleisteiner & Meier” drywall construction GbR. In 2007, “B&M” went separate ways, and the dry wall construction company “Der Meier” originated.

In 2008, the first prototype of our LED profiles was developed.

Working on this idea took a lot of time and thus Jean Zentgraf entered the company to provide for the necessary support.

By the changing area of thought, another name was soon necessary and in 2011, “Der Meier” became the new name of, “LED Profilelement GmbH” with both managers Norbert Meier and Jean Zentgraf.

The company grew and it came fast to cooperation’s with the companies Hera and CHF, as well as LedXon and Scheiber.

Different fairs and prizes followed and history takes her run …

We see it as our job, to fit the "light" into the construction form, so that it is recognizable only as a shadow groove to generate subtle, indirect lighting. This produces a pleasant, reassuring atmosphere which positively affects the mood, well-being and goodwill of the viewer. Light is used to put straight accents, to draw the attention or even to provide prestige and exclusivity. A light scenario for any room, a simple and non-glaring light, using the current building materials, e.g., plaster boards or wet plasters in the harmony with the modern technology.

The result is slender, filigree, even disc-like. Our profiles adapt themselves in the materials and melt into the construction form which appears like it is casted together. A new standard for every designer, architect, lighting planners and developers!

The advantages are unmistakable:

With the mounting possibilities in horizontal as well as in vertical direction, no hurdles are too big for the profiles and there are no more barriers for the user / planer. For every building, for every home and for every customer an individual and perfectly fitted solution is found.

E-certificate, training as lighting designer and more to the academie
Profiles and Accessories shop under construction
Make an appointment and experience products live in our showrooms contact